Gam Bai was a toast we learned in China that literally meant "dry glass'. So here's to you, bottom's up, down the hatch, cheers, here's lookin' at you, kid and get er' down ya! 2010 is about to end and I'm not sure I'm all that sad about that. Not that I want another year to go racing by but this one has sure been an up and down roller coaster ride from almost being stranded in Italy because of ash to a crazy hiring process at Sheridan and an economy that had moments when it was a graveyard out there and others when we were wondering if we'd have any pots left to sell.
Here are the last pots of the last kiln for 2010. They are some yunomi's destined for the invitational Yunomi Show at Akar Gallery. It opens in March but they are due now so that they can start the long process of photography.
I try to change mine each year. I always have the signature lug on the side. This year's lug bigger and better than ever. When I made them they looked like mugs sitting on saucers. I liked that since for me it was a salute to Britain and America which is the reference for my work. I am not from Japan so mine are really not yunomi's but a  mug with attached saucer and lug.
So my friends all the best of The New Year 2011.
As we start the New Year
Let's get down on our knees
to thank God that we're still on our feet.- Irish
Here's a beer and bump to all of you. 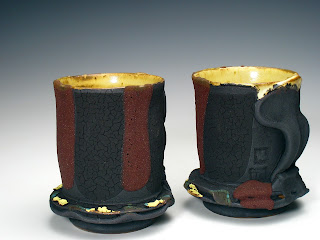 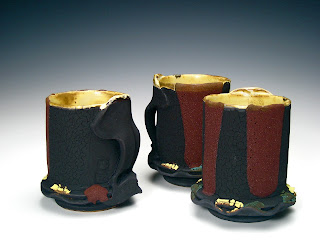 Stay centered and bottoms up, we'll all sleep when we're dead. Been a year for sure, scar tissue is a wonderful thing as it closes the wounds, and this year I'd say I'm about 99%.

John Post said…
No matter what clothes your pots are wearing Tony they still look like you.
January 6, 2011 at 7:54 PM