Since Christmas I haven't really had much time to think about my own work with teaching and three weekend workshops. What does happen though in teaching is that I try to problem solve someone else's pots and thru that process think about how I can use the demo as fodder for my own creativity. This past couple of weeks a student has been replicating the classic Hans Coper form and a form she calls a "paisley" which is a tribute to her homeland of India. For the paisley I introduced the Dutch claw for enclosing a form and for the Coper's we opened a cylinder and left the bottom thick and lifted it onto a leather hard first section and opened it with a broom handle. You have to hire me for a workshop for the demo.
So today I had a day in the studio. I had sketched what I thought were paisleys and I decided to add the thrown bottle upside down as the neck and celebrate where I attach it. Much easier to throw that way. As I began trimming and assembling they became not at all what I intended but a ewer with a little boys wee wee for a spout. Will they work, will they pour, will anyone use one for liquids- hell no!!!! I still put the hole in. Will they work for flowers or serve a visual function- hell yes! 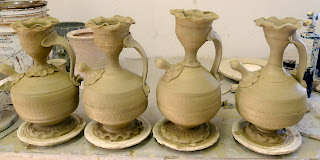 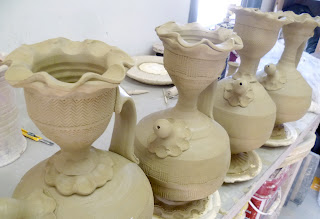 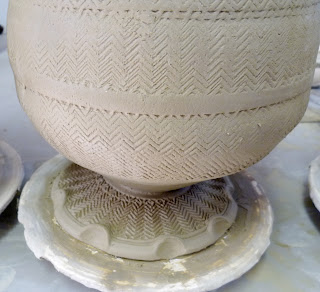 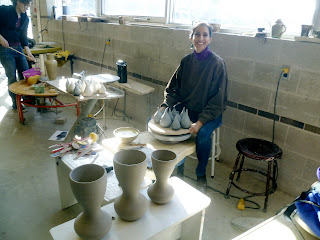 I learned a lot from the sketches and will make 5 more tomorrow. I have some ideas on how to improve the foot. I had forgotten how much fun it is to make things in the studio when the sun is shining, the tunes are on and you have no idea what you're doing.

smokieclennell said…
Alex: Yes, I did teach John or tried to. He should be a fully fledged holy roller by now. He will have finished his Masters in Religous Studies. Believe me I was not his influence in the religion dept.
February 18, 2011 at 2:17 PM

Togeika said…
Tony, Nice! Are you using roulettes for your herring bone impressions?
February 19, 2011 at 7:34 AM