Ronnie the Rat phoned me last night to inform me of the passing of Carter Gillies. Carter was an exceptionlly kind and thoughtful human being. If I have my facts straight Carter was a thesis away from getting his Phd in Theology/Philosophy when he wandered into the ceramics studio at University of Georgia/Athens. Ron would have retired by then but he has remained close to the faculty and ceramics community there. I met Carter thru blogging when there used to be a rating by Ceramics Monthly on how many people enjoyed your blog. Carter hit #1 one year. His blogs were amazing personal philosophical out pourings of his love of the craft and the people of his clay community. He was the Michael Cardew of Athens for me. I would read them then reread them only to find more depth of thought. Take some time to read some of Carters brilliant writing- https://cartergilliespottery.wordpress.com 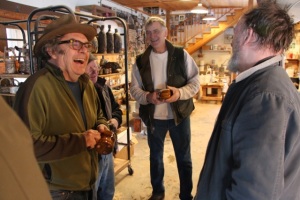 Here is a pic of Carter, moi, Steve Driver and Ronnie. We would meet each year at Ron and Hesters during the Ratagama firings. 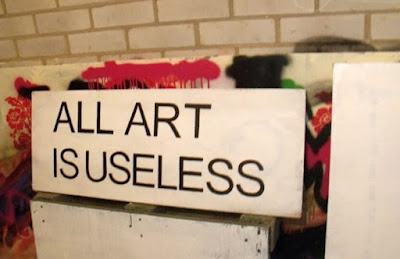 Here is a small snippet of Carters words. Sometimes he stirred the pot and people called him out. He took it very personally and would retreat for awhile but that forever questioning mind never could completely stop. Rest well my brother. You left a lot of love on this earth. Peace, Tony Carter wrote" As someone who earned an MFA in 1997 I am very familiar with the art world mandate that art be useless. Pottery was, for most of the snobbish persuasion, a ‘craft’ not art, and it has been rare that museums and high end galleries countenance pots in their displays. I heard one gallerist even describe putting boxes of Picasso’s pots in the closet during the 70’s or 80’s because the audience refused to assign their value as actual ‘art’. The absurdity and presumption of the necessary uselessness of art has dogged the field in uncountable ways. But that isn’t my complaint today. I’m asking whether the case has ever been made in the name of advocacy that the value of art is that it doesn’t do anything. It seems like a naive approach that would get laughed out the building, and I suspect it is more an invention of Danto’s than an historical example of selling the arts. But however the arts used to promote themselves, with the turn toward MBAs in arts leadership positions I can see the instrumental attitude riding to the rescue of not only how arts organizations get run but how the arts are advocated for in general. There is an urgent need to prove the value of the arts, and instrumental reasoning is exactly how the search for evidence will seemingly best be conducted. It is a simple step from asserting the arts’ value in non-utility (if that was ever the case) and rejecting that to finding the value of the arts specifically IN utility.