Some people don't get branding. Fred J Eaglesmith has got a brand. People that follow his music are known as Fred Heads which is a take on those that followed the Grateful Dead and were known as Dead Heads. In the park near me this weekend "Fred" is the headliner. He doesn't need no glittzy gold lettering and foofaraw. A handpainted sign at the side of the road says it all " Fred". The park will be rockin' all weekend long with Fred Heads.
As a teenager Eaglesmith hopped a freight train out to Western Canada, and began writing songs and performing. He is known for writing songs about machines or vehicles, including songs about trains, tractors, trucks, cars, and engines. Rural life, dogs, guns, drinking and farming/ranching are other common themes. Many of his songs are about failing farms and small businesses. Down and out characters dealing with loss of love or livelihood, and quirky rural folk also populate his songs.
Yeah, this is my kind of music. Comparisons to Guy Clark was all I needed to love Fred's music. 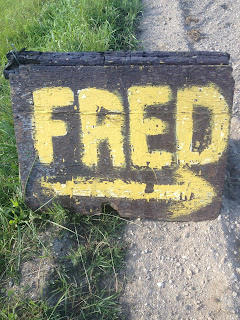 Dennis Allen said…
Thanks for the tip Tony.If this guy is anything like Guy Clark I know I'll really like him.
August 15, 2013 at 4:33 AM