What did y'all learn

The firing yesterday went into the night. Some tired campers for sure. I came home and sent them this note. Rather lengthy for ya but some information that may be worth the read. T 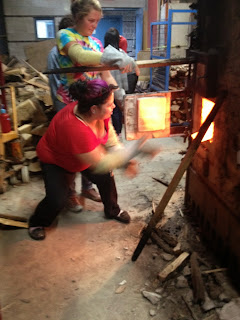 What did y’all learn???
Here is what I learned after 35 years of firing my wood kilns always named after the greatest heavyweight boxing champion of the world Mohamed Ali aka Cassius Clay. Clay was said to float like a butterfly and sting like a bee. As a young potter I was bitten hard, often and left for dead bruised and defeated.
Here is how I prepare to meet my worthy opponent Cassius Clay.
1.     I never ever glaze, load and fire on the same day.
2.      I always have a lovely supper with a glass of wine. I have a good nights sleep! Morning will have me make a cup of coffee and a fried egg sandwich that I take out to share with Cassius Clay. We will have a talk about our mutual respect for one another. The dance begins with a small fire.
3.     Start the firing in the morning. Putting in one night is hard but putting in two is a recipe for a ful lblown knock out.
4.     Always have your wood cut, split and stacked weeks before the firing. This was a daily ritual for me at the end of a throwing day. Cut, split and stack for an hour each day.
5.     Always prepare more wood than you know the kiln requires. I have fired through unexpected rain, hail and snow storms.  Once at -47 wind chill and blowing snow. Low pressure can stall you for hours.
6.     I fire in silence. That means me and the kiln. It is not a social and I don’t listen to music. I listen to the kiln. We heard Scarlett “Roar” last night. Cassius Clay gives off a puffing sound which is his breathing. If I can hear his breathing I know I have him working and on the ropes.
7.     Rope a dope. Don’t get cocky and think you have your opponent beaten. Rope a dope was Cassius Clay’s  method of tiring out a boxing opponent by pretending to be trapped on the ropes while the opponent expends energy on punches that are blocked. Boom , boom boom and  a left hook has you flat on your back , winded, and defeated.
8.     Study your woods. I can’t recommend Jack Troy’s book on Wood firing enough. The chart at the back explains wood properties.  Any firing problems I have had can be traced back to wood and lack of preparation.
9.     Remember- If it were easy everyone would be doing it!
10. Bon feu!

Cambria Pottery said…
Thanks for these words. Is this the kiln at Sheridan being fired?
October 11, 2013 at 5:44 PM

Dan Finnegan said…
Excellent words of wisdom, TOny, as I prepare to fire my double-chambered beast. I think I can check off most of the rules!
October 14, 2013 at 7:30 PM