I met the legendary Cynthia Bringle at David Stuempfle and Ben Owns kiln sites. Her legend had reached me all the way up into The Promised Land of Canada. Here was a woman 80 years young coming to a firing with a bottle of Peg Leg Porker bourbon. She went on to tell me the story of her nephew's BBQ joint in Nashville. He had lost his leg and put on a whack of weight so what else to call your restaurant- Peg Leg Porker.  Someone is offended out there I just know it! 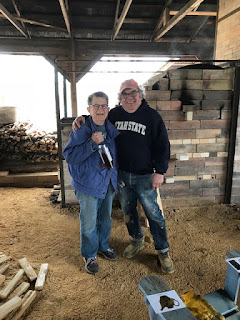 Cynthia speaks her mind and it apparently rubbed off on her nephew.
My cousin Brenda's daughter Sara was going on a women's weekend in Nashville and I told her she had to go to  Peg Legs.  She reported it was totally awesome and she brought me home another addition to my wardrobe. 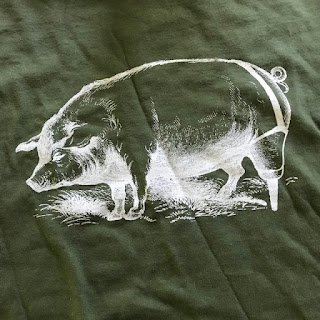 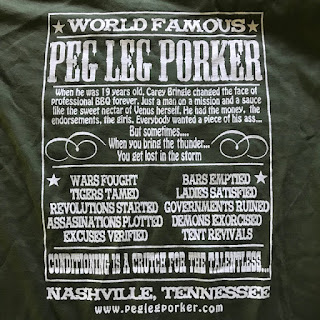 Bars emptied, women satisfied -God that has to piss someone off out there. How about everyone wanted a piece of his ass? Conditioning a crutch for the talentless.! Oh man Carey Bringle you are so un-PC. If you wrote on line you would get barbecued.
I heard once that Cynthia juried a teapot show and rejected all teapots with a commercially made cane handle. Good on you Cynthia for having an opinion, an aesthetic, a voice and of course the courage to speak it. More than ever on this celebration of Independence Day July 4th do we need voices of truth.
PS: Thanks Sara for the t-shirt. I love it.

Marian Parkes said…
I can attest to how wonderful both Peg Leg Porker AND Cynthia Bringle are!
July 4, 2019 at 5:25 PM

smartcat said…
Reminds me of the farmer boasting about how smart his three-legged pig is.
Visitor asks why the pig only has three legs.
“Pig that smart you don’t want to eat all at once.”