I got a call from my southern buddy Big Pot Man David Stuempfle. David is coming over to Portugal to teach my class of 9 mudslingers at Clay Kitchen Portugal his method of making big pots. 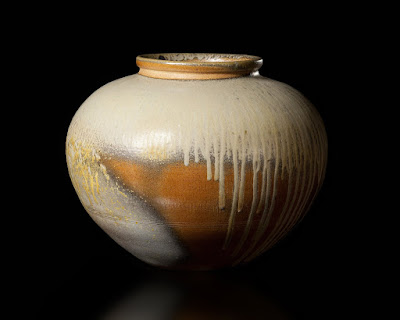 This is one of David's beautiful roundies. David called to see if I was still "on" for Portugal and whether any of my students had cancelled due to the pandemic. I said " I'm still on as are all of the mudslingers!" He sounded amazed. I want to tell ya a little bit about potters. They are very used to risk. They are very used to disappointment. They are as tough as nails. To illustrate my point. I am a legend at Peters Valley School of the Arts. I was to give a workshop at Peters Valley in NJ in August 2011. I arrived there after a 10 hour drive to receive a call from my then wife to high tail it home as Hurricane Irene was coming. I met with the students and asked if they wanted to run for the hills or damn the torpedoes full steam ahead. Every other faculty on site headed for the hills. The potters would battle on. Since I was Captain of the ship I had to man the helm I was all aboard. Irene arrived dropping trees, flooding Bruce Dehnert's basement, the skies darkened the roads were washed out and it was a war zone. We had no electicity, no toilets, but we had stocked up on wine, beer and bourbon so we fought the big fight. The kiln went off as planned and when Irene left there were trees down so that no one could leave. I had a quarter tank of gas so when they chain sawed trees for me to leave after we unloaded the kiln of course I barely limped on vapour to PA where a gas station had gas and power. Bruce didn't get electricity until November as PV is a National Park and a low priority. So David here is the deal. I am the creator of my life not a victim. The Universe has been super good to me. . I could shut down and not go outside for fear of getting hit by a car. I just hope it is a really nice car with a beautiful woman driving it. Here are a couple 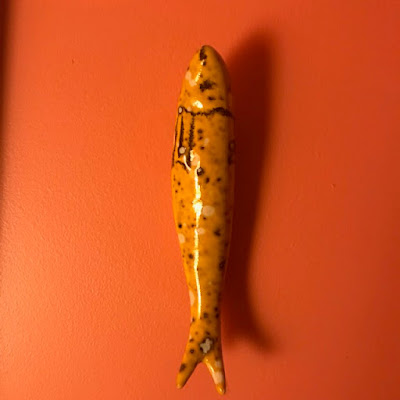 of gifts my daughter Robin brought back for me from Portugal. I will eat fresh sardines in Portugal. I've saving these olive oil soaked ones for my buddy Doc.

Jared said…
If your vaxed and no respiratory issues, go for it. Portugal has good health care. Just dint get hospitalized!
January 8, 2022 at 9:35 PM

smartcat said…
That sardine can is so cool I don't know if I could ever open it!
Go for Portugal. But those of us who are unable to travel have high expectations of posts and pics!
BTW Happy 2022!
January 9, 2022 at 6:23 AM

Unknown said…
Your students are inf for such a treat. Davis is an amazing potter and teacher. The two of you together will be the best.

please keep us posted on all the wonderful pots and fun times you will have.

Anonymous said…
And in the end it is not the years in your life that count, it’s the life in your years.

bptakoma said…
ah, those fresh sardines off the grill. heaven.