Well I just wrapped up a great week doing the Double Whammy workshop with Hayne Bayless here in Naples, Florida at the combined studio venture of Annabelle Johnson Studio and Clayland Studios.
I had an amazing group of potters that made some big pots. To post on a blog as much as I do you have to have a story to tell and to have a story you have to leave the farm once in a while. God, I got enough material outta my bunch to keep the blog active for a month. I always begin a workshop by introducing me and then asking how each person got involved with clay. The best story to date had to be from Danny. It is a story of amazing personal determination. Danny had a teacher in high school that turned him on to clay. He turned a blind eye when Danny would skip other classes to work in the pottery studio. Danny was so into pottery he wanted to be a potter and bought a wheel. As it turns out he became hooked on drugs and booze and made his living as a full time pusher for several years. He owed a dealer money and had to give him his wheel in payment. This ended a passion for clay for over 25 years. 25 years ago Danny and his bride Honey got sober. He celebrated that HUGE accomplishment today. Congrats Danny and Honey!!! With this life turn around he decided they would live here in Naples half the year and half the year in the north. They have been living their dream happily ever since. Danny turned to running when he gave up booze and alcohol and has won dozens upon dozens of Iron Man races, marathons, and holds the record for a master runner at something like 480 miles in a week. He still has some work to do on his taste in pots. He picked this one up on the roadside and wondered why no one else had. We need to talk more, Danny!
Annabelle took me to meet her mentor and old time hippie potter friend Rinny Ryan. Still going strong and living the life. I bought Danny and Honey a jar and some honey to celebrate their big day of sobriety. The jar read "Stay healthy, eat your honey!' I hope Honey is still talking to him tomorrow.  I think there is no doubt. They have carried each other thru the worst of times and deserve the best of times. 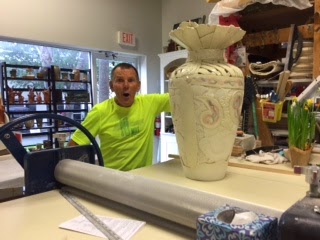 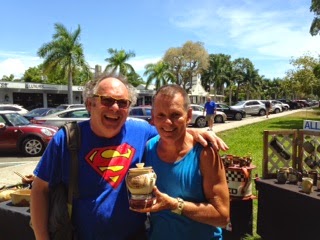 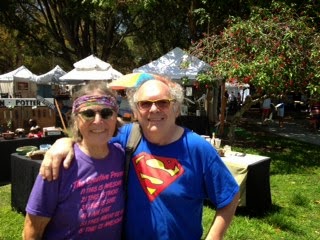 Hey everyone thanks for all the B-Day wishes. I had a great day, an awesome week and an even better year.

Vicki Hamilton said…
Made me cry T. Commitment is an awesome thing. Overcoming these sorts of obstacles is even more awesome. You're just the person Danny and Honey needed to bump up against.
April 11, 2015 at 5:27 PM

Unknown said…
hey Tony, thanks so much for the wonderful workshop in Naples! I learned a lot and you have brought me new insight on pottery!it is the most fun week I have ever had doing pottery....I have shared your blog on my Facebook page! thanks much for the Honey jar!
April 14, 2015 at 5:40 AM