I have often been told I got brown down. It is comment about brown pots that lack the pretty colours of flowers and the bright lights of New York City. . This brown pot has an energy about it I know exists and only some would recognize. I know it was made on my Lockerbie kick wheel and fired in my train kiln on it's side. I know it was the kick wheel because of the slow moving finger marks. It had feldspar chunks wedged into the clay so throwing fast would have ripped my hands to shreads. This pot was in the collection of my friends Ron and Hester Meyers. They moved into town and left their bigger home and studio in the country. The house was full to the brim with pots including Voulkos, Reitz, Simon, Audio, Hindes and many of the All Stars of Clay as well as many of pots from those in the mud pits wherever they travelled. Anthony Schaller Gallery provides a service for the secondary art market. In other words they sell peoples collections for them. It is a valuable service for those of us pot collectors that want someones work from a certain time period or from potters no longer with us. A collector from Long Island(name with held as a courtesy) bought this bottle from Schaller. It is a pot that the likes of Ron and he see life in. It ain't all the pretty colours of the rainbow. It ain't smooth and light. But what it does do as my collector friend says "As interesting as your vase is as a ceramic object, it is so much more fabulous when it is performing the function for which you created it. Studio ceramics can be attractive as objects, but if they cannot perform their task well, the mark is missed. This vase is a knockout. Look how it seets off this simple array of hydrangea flowers. There is some magic there!!!" Thank you for letting me relive this pot with such a tasteful display of flowers and for your fine observation. 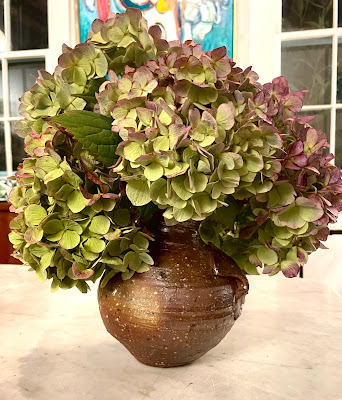 The pot enhances the flowers. It doesn't try to steal from their beauty. Who can compete with Mother Nature. She is the best ever!

Anonymous said…
Gratitude is the memory of the heart.
To remember the benefits provided by others.
Do you want to be a grateful person?
Then remember to remember.
September 29, 2022 at 1:06 PM

Anonymous said…
Guldagergaard is one of eight ceramic centers in the world where international artists apply for a residency. The Artist-in-Residence program gives the artists an opportunity to work without distractions in a professional environment, exchange knowledge and experience within the ceramic field, and to start inspirational collaborations with other ceramic artists in an international environment with professional support and dialogue from the staff at Guldagergaard.

Anonymous said…
EKWC is an international artist-in-residence and centre-of-excellence for ceramics. For more than 50 years, artists, designers and architects from all over the world have been received here to experiment with clay. This results in both special works of art and technical innovations. The results can be seen in museums from New York to Tokyo.

What is special about EKWC is the combination of world-class facilities, the presence of advisors with internationally leading technical knowledge and the openness to freely share recipes, processes and innovations. The mission is to further develop the material ceramics and to promote its application in art, design and architecture.

Tony Clennell said…
Nancy the secondary market of course affects living artists. So do flea markets where some work might end up if no one knows the pedigree of the work and the value. Tony

The Artist’s Resale Right would allow visual artists to receive 5% when their work is resold – just as they do in at least 94 other countries.

An artist resale royalty, or droit de suite as it is often called in Europe, provides artists with an opportunity to benefit from the increased value of their works over time by granting them a percentage of the proceeds from the resale of their original works of art.
October 7, 2022 at 8:12 PM

Authors of original works of art are entitled to a royalty each time one of their works is resold through an art market professional.

The Artist’s Resale Right (ARR) entitles creators (‘authors’) of original works of art (including paintings, engravings, sculpture and ceramics) to a royalty each time one of their works is resold through an auction house or art market professional.

Anonymous said…
It's rare to find brown as the answer to the question, "What is your favorite color?" but that's a shame because brown is brilliant - really! Brown is boring, I hear you say. Brown is not boring! From the palest tan to the darkest burnished chestnut, brown is brilliant and wonderful.

or Happy Dumpsgiving, if you are distancing yourself from disfunctional relationships.

Anonymous said…
Brown tends to feel like a solid, earthy color, but it can sometimes seem drab and boring. Light browns such as beige are often used as neutrals in design and fashion. While they can provide a conservative and traditional backdrop, these shades are often perceived as dull.

Anonymous said…
The Color Brown: Meaning in Color Psychology
Like most colors, brown can have positive and negative associations and meanings. Some of the key characteristics associated with brown in color psychology include:

A sense of strength and reliability. Brown is often seen as solid, much like the earth, and it's a color often associated with resilience, dependability, security, and safety.

Feelings of loneliness, sadness, and isolation. In large quantities, it can seem vast, stark, and empty, like an enormous desert devoid of life.

Feelings of warmth, comfort, and security. Brown is often described as natural, down-to-earth, and conventional, but brown can also be sophisticated.

Anonymous said…
There are significant dangers for an artist’s career that lie within the secondary art market, sales generally occur in auction houses, and all the way down to eBay and Value Village and other Thrift stores.

playfully textured vessels known as Drippy Pots. Referencing a melty summertime ice cream cone or icing on a cake, the glossy material in mottled pastels, speckles, or single colors trickle down the exterior of mugs and cups. To contrast the neutral-toned earthenware of the base vessels, Giniewski throws simple shapes and then dunks the functional objects into a thick glaze.