I received a note from Eric Botbyl (Tennessee) saying my post on “Finding a Tear” had strangely moved him and he suggested I listen to Johnny Cash’s song “The Man Who Couldn’t Cry”. I have to tell ya I love Johnny Cash. Not that I have listened to his music all that much but I love a person that has walked the walk or in his case walked the line and then talks the talk. That song had so many many lines I could use for attention getting titles for my blog. Bullied, beaten and buggered, cheated by a whore and Eric’s favourite which is a cruel one- I hope my ex-wife dies of stretch marks. Johnny had been a bad man who became a better man.
I played the song while making these trays. Anyone can buy a mould roll out a slab and lay it in there. Voila aren’t I a clever artist. But to beat, bully and bugger you need the help of friends. I enlisted my harp from John Neely(Utah), my ugly stick basher by Stanley HurstAlabama), my paddle by Steve Driver(Arkansas), my pestle from Uncle Jimmie(Heaven) and a rolling pin and sticks. I don’t do production anymore so to have a big slab roller would be foolish and it would probably end up covered in stuff from sitting idle.
I am using a black sculpture clay to eliminate warping and making the foot separate. I will just glaze the tray and glaze it to the foot. It just seems easier for me to handle that way.  The cuts I make with a razor blade and bugger from underneath. This is something I learned a long time ago from my old friend Crawdad Ron Roy. He called it his volva series. It’s as close as I could get to introducing buggering.
Thanks for the inspiration Eric and Johnny.


Have fun with your clay today. All work and no play makes Jack a dull boy. 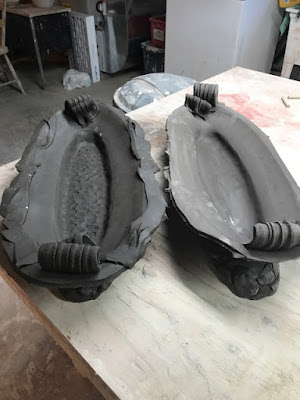 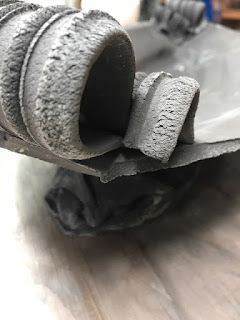 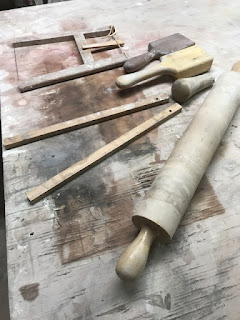 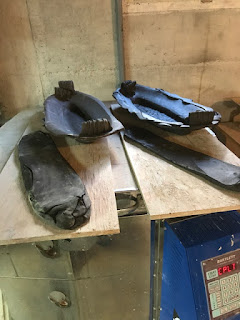