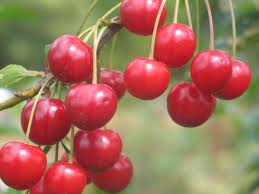 It's PYO cherry time on the Niagara Peninsula. Since we named our pottery Sour Cherry Pottery after the orchard of sour cherries that used to be there before they discovered there was more money in booze than tender fruit and tore the cherries out and planted grapes. So we now have van loads of people that don't read English so well getting out of their vehicles all ready to decend on the cherries. When they walk into our showroom there is a look of disbelief on their faces. Where are the cherries? Where are the trees? Where are the ladders? Where the hell am I?
Our best one was when the guy came in and said to me " Where are cheekans?" I said "What are you talking about- where are the cheekans?"  He said "Sour Cherry Poultry vy don't you sell cheekans?'