I sat back with a Woodford Reserve and read my January copy of Ceramics Monthly.  I was thrilled to see an article by Derek Au a young American I met in Jingdezhen, China when I was there studying with the USU crew for 4 months. Derek spoke fluent Chinese and was working and living in China. That was in 2007 and he's still there. Derek's article is one of the most honest reads about being a studio potter I have read in ages.
The last paragraph reads "I have so much respect for anyone who earns a living from making ceramics. It's one thing to have nice ideas, quite another to make them reality, and to actually make money doing it is incredibly difficult."
So Derek here's a tip of the flask to you! Welcome to the Mutual Admiration Society.
Tony Clennell 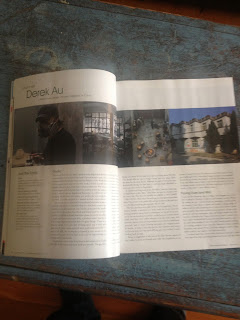 Cyndi said…
Happy New Year to you and Sheilla, both of you have given so much to the ceramics community. Thank you for your energy, love of this medium, and skills in communicating information and techniques. Here's to a prosperous 2013.
January 1, 2013 at 8:07 AM