A friend and reader of this blog sent me pictures of the current state of Issac Button's former kiln. It is heart breaking really! If this were a famous artist's studio would it be left to rack and ruin? I wasn't going to post the pictures as they just make me sad. I sometimes believe I was born a couple of decades or maybe even centuries too late. Thankfully the film Issac Button A Country Potter was made and will be a reminder of the man and his work. He made enough pots to go up and down the banks of the Thames River. 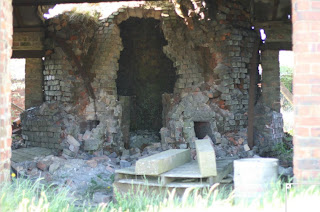 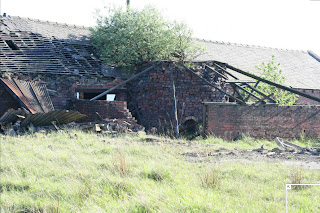 The summer I worked at Mick and Sheila Casson's in Herefordshire Mick told of Issac Button. Mr. Button was an employee of a company and not a self employed potter. In the UK compulsory retirement at age 65 so Issac was let go. He went around to all the renowned workshops David Leach, Winchcombe,  etc, etc asking for a job but no one knew what to do with a man that could fill there entire studio with a few hours work. He died not long after. May he rest in peace.

Anonymous said…
wow...that is just too sad for words! I've been following your letters to Mr. Button and finally got around to watching that wonderful movie...it brought tears to my eye....what an amazing man! so down to earth, what with the cap and pipe always present! i loved it, and have passed it on to some other folks.
Thanks Tony for bringing this to my attention, i didn't know anything about this amazing man!