You never know who is reading your blog and what can come of it. I was high with delight today to receive an email from John Foley the owner of Imagine Gallery in Suffolk, England asking me to be in a show of potters that have shown a tip of the hat to country potter Issac Button. His long time customer John Anderson produced the film Issac Button - A Country Potter as well as many films on famous potters. Although the film producer is deceased his wife continues to collect pots and her collection of Issac Button pots in museums is being brought together for this show. If I could be present at that opening I think I would have goose bumps. I remember well having pear cider at Mick and Sheila Casson's Wobage Farm from a Issac Button cider jar. It was really Andrew McGarva the Casson's son in law now making pots in France that turned me on to Issac Button. Andrew's book Country Pottery- Traditional Earthenware of Britain is a must for anyone's library that salutes the giants shoulders we stand on. 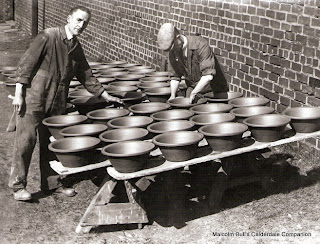 A picture in Robert Fournier's Ceramic Dictionary of one days throwing of 2000 lids by Issac Button says it all. It was probably 2000 jars yesterday.

Vicki Hamilton said…
Congratulations TC! No surprise here however. I love the Isaac Button videos - especially the shirt, tie and pipe!
January 11, 2013 at 7:25 AM