The sediment (the sand, mud and pebbles) that make up Sedimentary rocks come from other rocks that have been worn down by wind, rain and snow.
The pots I am currently making suggest sedimentary rock formations.
This is the end of 4 weeks of long days than rarely end till usually around 10 or 11. I am worn down like the rocks I love.  I had an hour power nap this afternoon.
This week Dick and I were up late talking about geology and sedimentary rock formations. I woke up in the morning and ran down to the studio to implant some feldspar chunks into the still wet slip. Man these wall plates ought to be expensive since a western potter friend Richard Selfridge who gave the chunks 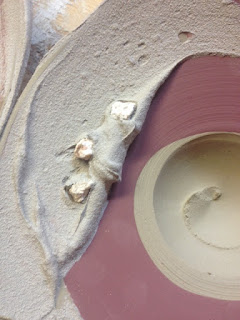 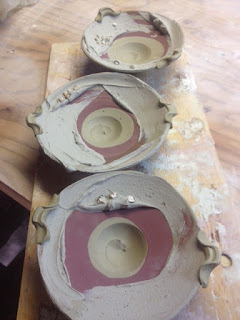 to me said they were collected in a rattlesnake infested cave in Alberta. I’m not a fan of snakes so I ain’t gonna collect no mo!


It’s Saturday night so I was in the studio to try and get back my mojo. The blues are on and life is good.