I'm not at Yasgar's farm but I am at Peter's Vallery firing the noborigama. The kiln is a version of the Ruggles and Ranking chamber kiln. It fires like a rocket and we have Cone 11 in 18 hours and held it for another 7 hours. The second chamber was at Cone 7 when we were finished with the first. Totally length of firing was 28 hours.  We had a peak in the kiln as we need to unload tomorrow and it looks killer. The students are all in the studio making pots after  participating in a wellness clinic that includes wine, and bourbon. We went to the local pub for a beer after class and low and behold there were the gang from blacksmithing. Great minds think alike!  My students  filled the studio with some really great pots all in one day. I have been called a slave driver. Sometimes you get a group that exudes energy- this is one! Push them to be better! 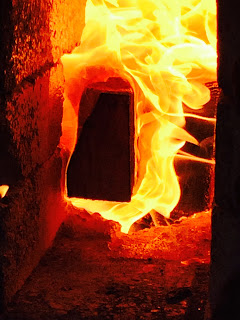 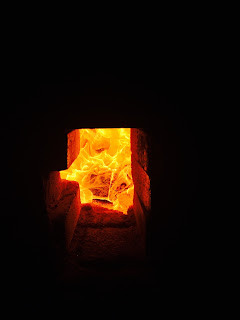