I usually say it takes 7 years of full time potting to learn how to make decent pots on the wheel. It then takes another 10 years to develop a recognizable signature. So 17 years in and you should have a look about you.
12% of the population believe that Joan of Arc was Noah’s wife so I can say a lot of things and have people believe me.
I had prepared a talk for the Hamilton Potters the other night but it was cancelled due to a bad snow storm.   For the talk, I had been contemplating what my legacy will be. I was hired for 15 years at Sheridan College to teach production throwing but I haven’t really produced any production potters.  I have however nurtured a gaggle of potters that are what I would call studio potters and damn fine pot makers. Some potters believe there is only one way to make a living in clay and that is their way.
Emma Smith is attending the University of Hard Knocks. She is probably less than 10 years into the game and a recognizable style is surfacing. Lots of pots, lots of firings, lots of reading, lots of workshops and travel, lots of pots in her collection, and lots of time focused on her craft. She is full on and it’s showing. New work is upped in scale and very distinct in narrative. Here are some examples going into this weekend's firing.
Tonight Andrew Kellner is presenting his Graduate Show at West Virginia University.  Andrew has been full on for probably the 17 years I mentioned.  Here is a  3 tier stacking box of Andrew’s he gave me for Christmas.  I wanted to be at his grad show in Morgantown, WV but I had an appointment at the hospital where they were apparently looking for my head. Luckily it was not found where they were looking.
You will be seeing more from these two. I don’t think it will be a career of production but it will be a life in clay.  Here is a shout out to both of you and the muddy roads you're on. Hey Andrew, I'm with you in spirit tonight. Cya on the weekend Emma. 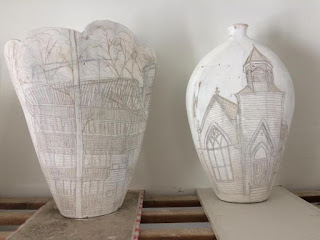 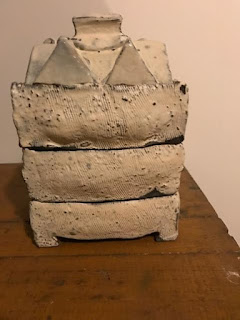 Unknown said…
Well, T, I'd agree with both the 7 years and the 10 years. I'm just kind of getting into the 10 year segment. I noted, with interest, that the 7 year line fits Malcolm Gladwell's 10,000 hour theory. https://en.wikipedia.org/wiki/Outliers_(book)
End of first paragraph.

Another resource is Simon Leach's video on What it takes to be a potter,
https://www.youtube.com/watch?v=9u_pF6U9Vak&t=59s
It might be described as "dumbass doggedness" First question for someone who wants to be one is "how many hours a day and week do you think it will take.