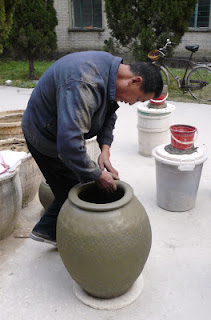 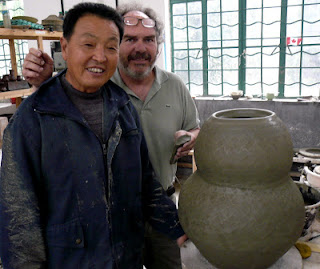 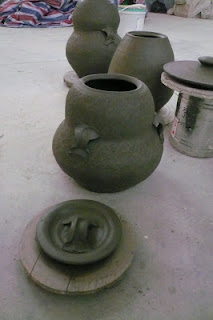 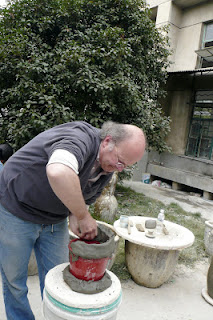 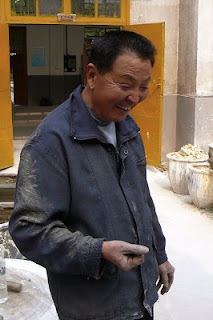 John Neely put some pictures up on FB yesterday of some water jars from Mr. Jin’s dragon kiln in China.
It was 10 years ago I was with John and the USU gang studying at the Jingdezhen Ceramic Institute in Jindezhen, China  for a 4 month life time study experience. Mr. Jin was one of the guest artists and for most of us a walking legend. I can’t remember the length of that multi chambered kiln but I had never seen one as big.
He was keeping his men working by having them make roof tiles and wood firing them. The demand for his water jars had fallen off with people moving away from agriculture and living in the city complete with refrigeration. My fellow grad student and pal Trevor Dunn and I were convinced the kiln would not be roaring in a decade. Trevor went back to China to document Mr. Jin and his dragon.
Mr. Jin made all of his pots on an upside down 5 gallon plastic pail. He had a large coil up his arm and over his shoulder as he walked around the pail backwards squeezing the clay as he went. His large pots were more symmetrical than those I make on the wheel. He allowed me to put handles on them. This was an honour for me much like being asked to jam with Keith Richards.
We were firing the wood kiln at JCI the day of his visit and after a day of making in the studio he joined us at the firebox. While he sat in the squat position looking knowingly at the fire I fetched him a bing piju (cold beer). We didn’t talk because of language  but there was a feeing like we were all connected through the fire and the clay.
Look at his eyes. They say the eyes are the mirror of your soul. His eyes are bright and shining and full of life. That has been a life of hard work, blood, sweat and tears. You can tell how he walks he is a man of dignity and if my buddy Doc Agel wants to witness mindfulness I think it is displayed all over his person.


I love the look he is giving John as John gives the plastic bucket a go. It’s OK John you could teach him a thing or two about teapots.
PS: Mr. Jin is one of the presenters at NCECA in Pittsburgh this March- worth the price of admission.  I hope I can buy him a bing piju.