If you know what a blue flamer is then your youth was as misspent as mine. For the last couple of days we have been firing the big bourry box at Pinecroft. What we have been noticing on the last two firings is a turquoise/green flame from the stack. When we had some coaling issues with the wood yesterday we switched from the green flame producing ash to pine and voila a red yellow flame appeared. Laughingly last firing we blamed Teresa for her copper red pots in the firing. And yes copper can produce a green flame but for that long and that high- unlikely. I crashed early last night and now find myself up early in the morning wondering what the hell that green is. I read an article by the University of Wisconsin and I still don't really "git it". It  ain't the chemistry. It ain't the physics! It's the Swan Bands or reflected light.  Hey can someone there explain this to me at a Grade 8 level. I'm rather daft when it comes to understanding science.
Here are some of my mini moon jars fired a couple of weeks ago in The Amish Rocket up in Chautauqua, NY. You can look at some of the work fired in that kiln on FB Chautauqua Area Potters. Some nice fish by Marv Bjurlin, a nice Ronnie the Rat jar and some other goodies. Thanx Marv for posting the wee jars. Now to find a way to git em home to papa. 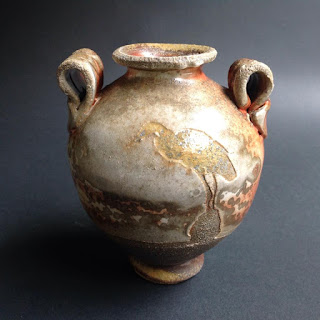 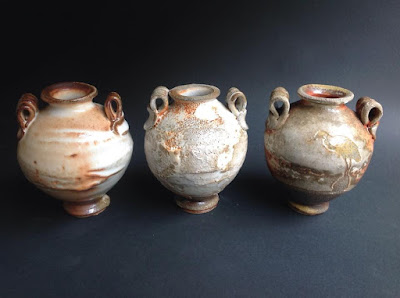 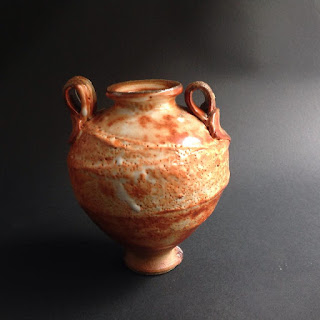