There are many theories on how to fire the elusive carbon trap shino. I remember a while back the late Malcolm Davis was phoning me in a flap because he had lost his soot. Where had it gone? How was I getting it? Malcolm invited a number of us to write an article for Studio Potter about the maverick glaze and how we approached it. Well, just before that issue was to hit the press Bryron Temple died and they cut the size of the article and hence I got the boot.
I have read where people glaze their pots, turn fans on them, face them to a westerly wind, keep them for 3 days under covers and then sit around and sing Kumabuyah to wish the soot Gods well.
My theory- put the glaze on, get it in the kiln ASAP and get firing. The wetter they go in the better.  Here are two bowls. The pumpkin orange boring bowl had all the same treatment as the lustery one minus the blue. It sat around the workshop for 3 days. 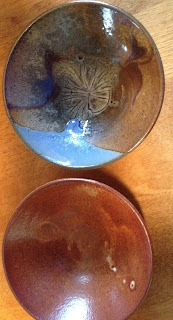 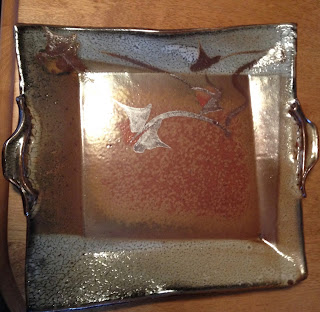 The soda ash goes off into La-la land and leaves you with Boring with a capital B. I used this one carbon trap shino glaze exclusively for 10 years. You learn a lot more about application and firing when you limit your selection.

Dennis Allen said…
I find that with a limited number of choices, I get done glazing a lot faster.

Wyndham said…
Try this test, let a glazed pot sit out till dry, then just before putting in the kiln take a hakeme (sp)brush and brush a water pattern on the piece.Then a second piece freshly glazed also with water brushed side by side and see the results. maybe something maybe not
Wyndham
November 22, 2015 at 11:49 AM

Togeika said…
I told Malcolm I got the best CT from pots glazed, put in the kiln and lit right away. He said it work for him too. I've not used carbon trap glaze since moving to Japan. Sometimes, I don't use soda ash in my shinos at all which reduces the chances of trapping. Calcined Alumina oxide can reduce firing times and temps the way soda ash does.
November 22, 2015 at 3:21 PM