The Richest Man in the Room.

The content of many of Carter Gillies blog posts are brilliant. I have been obsessing over the one on the 2 + 2 math theory. The idea that the sum of two parts can be greater than the parts is brilliant. Sometimes two people can get together and they bring out in each other more than they are capable of on their own. Sometimes two people can get together and they suck the energy out of each other and the sum is less than the parts.
At the recent Flour City Potter's Invitational my buddy Dan Finnegan announced to all present that he was the richest man in the room. Dan wasn't referring to material wealth but to personal wealth in the way of friends, love, job satisfaction and quality of life.
When I went off Airplane Mode at Toronto Airport there were messages from friends welcoming me home. Hoping that I was safe and sound. One was from long time friend Dawn Ellis. On Tuesday,  I invited her over for lunch and to meet Jack the Bear. Dawn is one of those people that bring positive energy into a room. She is interested in you and the conversation is not one sided. We really need to do something about her shoes though.
Wednesday another long time friend Don Ross and I went on a 12 hour truck ride and put in a 16 hour day  to dismantle a pottery that another friend Jane Thelwell has decommissioned.  I am reinventing myself- that's a long story for another day.
So Dan you may be the richest man in the US but Canada The Promised Land is mine!  I am a lucky man! 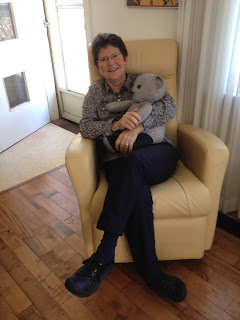