I'm sitting at McPukes having dinner as my phone died and that is my internet connection. Wanted to show ya some pics of the unload of the wood firing with my Hamilton Potter's wood fire mentorship group but I think I'll spend tomorrow getting my phone fixed/replaced. Poop!
We have one more firing to go after a very fast almost 18 months of being together. It has really turned into a kind of baseball team with starters, those that keep us in the game and the closers. In the first part of the series I was mostly the closer. All hell could break loose with the firing and it was my job to step in and close the game down by getting us to temperature. This past firing I don't think I stoked a stick. I just nodded approval, grunted, groaned sat and watched the game. We have those that like to start, those that do the first few innings, those that can do the night long haul and then the closers. It's really nice when everyone knows their role and does it well. This past firing I asked for 100 degrees an hour climb I came back and that is exactly where it is. We're just getting good at this and it is all over but the crying.
These are pics from the critique post firing. The critique is such an important part of the process.
Thx Rich Rowe for the photos. Awesome as always!! 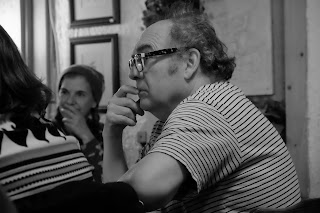 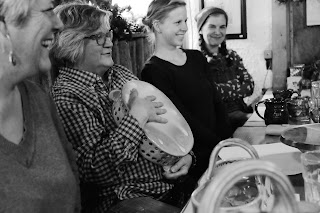