When I go travelling  I go out the door and  I always cross myself from head to toe and side to side to see whether I will have all I should need- my spectacles, testicles , my wallet and watch. I usually also make sure I have some way of making my morning coffee. The customs guy must have split a gut when he saw the Koreans bringing on a rice cooker as their carry on. Chris  it is up to you to translate this entire post to Mr. Jo. You thought organizing the conference was work try translating me.
I don’t know where to begin in describing the energy that was present at this conference. I guess to sum it up “ you should have been there!.
Here is a close up of the bowl Mr. Kim carved in the afternoon. That is carved thru 5 coloured slips revealing the different colours of a rainbow. I don’t think he took a breath to try to complete that bowl in that short of time.
A nice touch of cultural diplomacy was the brain child of Marketing genius Donn Zver where there was an exchange of the Canadian and Korean flag. All of the 260 delegates signed the Canadian flag and the masters signed the Korean flag. The Canadian flag will go home with them as a memory.
Since I was on my own I told Frank Tucker to go out in the night and find me a couple of beautiful women. They arrived at the 27th floor lounge along with a chilled bottle of wine. Damn my bluff had been called once again. We had a great party on the roof top 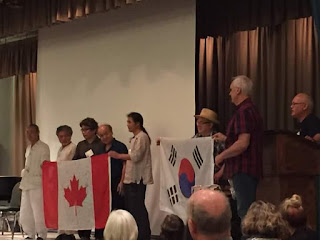 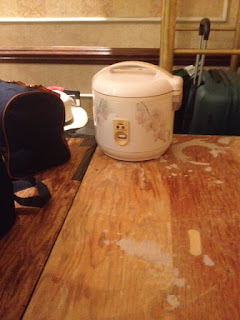 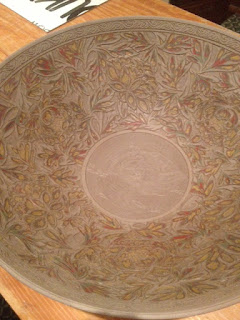 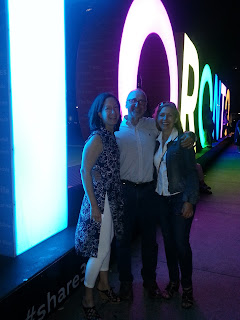 with a bunch of us that have been hanging together since the mountains were cooling.


I have just woke after sleeping for 12 hours. There was a day I would have had pots on the ware boards by now. Time to re tell the story of the young bull and the old bull.