The War Lord has gathered his clan for their allegiance to his sword.
My family from the north of England were known as Border Reivers that pledged no allegiance to the King of England or to Scotland. Their allegiance was only to their clan. This is my wood firing clan who I would go to hell and back for.
I have never had a partner that brought in another income to subsidize my passion for wood firing. I have been lucky to have had two partners that were good potters and hard workers. The fact remained though that our very livelihood rested on the success of the firing and the contents therein. It is only lately that my firings have become more social.
They are social after the work is done. Not to say there isn't good conversation and camaraderie during the firing but the two stokers are focused and left alone to be in sync with the kiln.  I love firing with this group as everyone knows their role and it is very serious business. We always have our Friday night pot luck at The Cactus Lounge where we toast the kiln God whoever she is and we prepare ourselves for 32-36 hours of hard work. Emma brought along her new apprentice Evan for his introduction to a potters life by Hell's Fire. Missing from the picture is Chris de Takesy who had to miss the clan dinner to mind her gallery. She will roll in for the dark hours of the graveyard shift. Commitment to the clan !
We will plow through 13-16 pallets of walnut. When the kiln is put to bed we will toast the efforts of the clan with a wee dram. 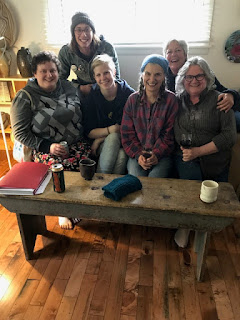 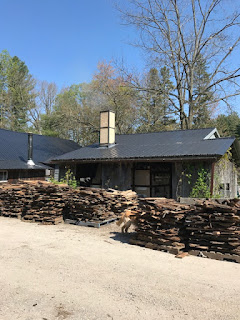