In 2005 I did a workshop at Hood College in Frederick, Maryland. The Ceramics Head Joyce Michaud took me out to meet a wood fire potter I had never heard of- Mary Bowron. We arrived just as the sun was setting and my first sight was this absolutely stunningly beautiful woman with white hair tied back with a red ribbon, bare footed driving a Kubota tractor. We were invited into Mary's life that was 100% living her art.

She was in her mid seventies at this point. There were thousands of pots that I couldn't decide on and her kitchen was laden with her paintings mostly of horses. 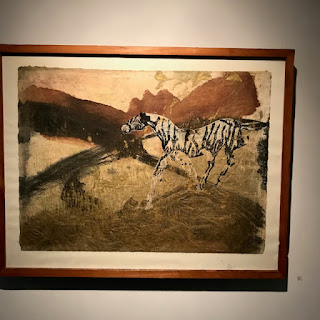 There is a show up at Hood College until the end of July of Mary's work. Here's what I didn't know. She had made over 1000 of these faces that weren't for sale. This was the voyage of 1000 "Silent Witness" heads. This was a comment on her up bringing in Alabama where she was documenting unspoken and unspeakable insults to human dignity and compassion. All the heads have no mouth for fear of speaking what they say and hear. The heads are a crowd of silence and fear.
This is not pretty work and in someways is disturbing.  A wonderful read in Ceramics Art and Perception entitled "Don't Make it Pretty' by Jack Troy.  Jack has painted a wonderful portrait of such a real and tuff artist. No wonder I had never heard of her. She worked for 60 years shunning any kind of pictures or articles on her and her work.
From Jack's article some lines from Emily Dickinson's poem
I'm Nobody, Who are you?
How dreary to be somebody 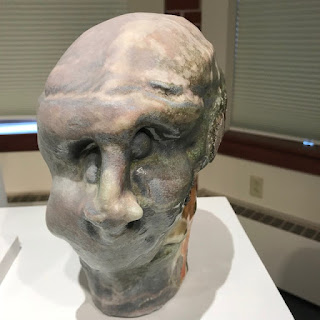 How public like a frog
To tell your name the livelong day
To an admiring bog.
Mary dreaded anything resembling recognition.
If you are within striking distance of this show.
Be prepared to be moved by a woman I think was one of America's most important and unrecognized  wood fire artists. Many of you know I am interested in Outsider Artists. Mary qualifies.
Here is the definition:
Outsider art is art by self-taught or naïve art makers. Typically, those labeled as outsider artists have little or no contact with the mainstream art world or art institutions. In many cases, their work is discovered only after their deaths. Often, outsider art illustrates extreme mental states, unconventional ideas, or elaborate fantasy worlds.

Marcus L. Davis said…
Thanks Tony. I only met a few times at Hood College and her studio between 2013 and 2015. She was such a vital and dynamic person, almost a force of nature. I was left in awe of her and the heads in her gallery were so powerful and breath-taking. I was also struck by her figurines, each different with their own personalities, yet all bearing an underlying thread of sorrow. The world is often not a pretty place and her work forces us to acknowledge that.
July 6, 2018 at 5:27 AM