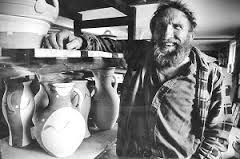 Ron Philbeck wrote: A potter once told me that Mick Casson said you have to make "some and some". Some for you and some for the market/them/whatever. I don't really like that. I jut want to make for me. But I do have to sell it. So I do struggle with the balance of what I make. I don't have another income.
Dear Ron: Perhaps since I was a student of Mick's I can try to explain "some and some". I'm with ya man! I live by the sword. The North Carolina Potter's Conference has me billed as a part of an iconic pottery couple. One correction to that! I'm entering my third year as a solo income mudslinger and all that I eat and everything that surrounds me is provided to me by clay. No partner, no other job! If it ain't pots it's the dissemination of pottery information in the form of workshops.
For the past 27 years pottery has been my only job. I have made heart shaped ash trays,cups for people with big noses, extruded incense burners, honey, sugar and potatoes carved on the side of lidded jars. Gee, honey can you put coffee in that sugar jar?
So you see my halo has slipped more than once. You went on to say that as you get older you lack courage. The exact opposite has happened with me. If I wouldn't want it in my house I won't make it.
I think you misunderstood my take on my slab trays. I like them and I like mindless easy work sometimes. Hell, I love to split and stack wood. It just disappoints me that they don't buy the stuff I'm really invested in as quickly. I got a bunch of here staring me in the face.
Here is what I'm on about and what I think people miss in Mick's some and some theory. If you pick something up you have to put something down.
If you are continually making the easy sellers you aren't taking the chances on the one off's. I know so many good production potters that couldn't make something creative if their lives depended on it. It's all gone! They spent their life time working at the Ford Plant putting nuts on a wheel. Oops, I meant cups on their wheel.
I've tried to make easy money on Monday and Tuesday and spend the rest of the week doing more challenging work. I've tried taking Frida to just make for me. I don't have the answer. Perhaps we can solve this over a couple of bourbons in NC in March.
This is a rather long post for me so I will close by saying there are only so many pots left in these hands of mine so I'll try to be of courage.  Unless you puke, faint, or die, keep going." Jillian Michaels

Ron said…
Hey man. Thanks for that post. It helps. And I'm def up for bourbons at the NCPC. I do want to be more courageous. I do want to make work that I'd only have in my house. I love that. And really for the most part I do. I think what I am missing is some of the passion that I once had. It's difficult to keep that up for years and years. But the fire hasn't gone out. And the good pots certainly outweigh the ones I struggle with. I am encouraged to get back in my workshop today. Thanks Tony.
January 9, 2016 at 8:13 AM

smokieclennell said…
Ron: How do you keep passion alive is the million dollar question. If you could stay as hot as that first year or so of romance it would be utopia. Good work my friend. Love er slowly and softly tonight- the clay that is! Best, T
January 9, 2016 at 8:50 AM

Dennis Allen said…
Hey, Diogenes, hope you can light up that lantern and search out an honest customer.When you and Ron have that bourbon. bring a third cup.
January 10, 2016 at 5:45 AM