I just unloaded the last trailer load of wood for 2017. I have hand bombed a helluva lot of wood this year. I have to find a better way. Got the wood in the wood shed and the rest all wrapped up for the winter. It will do some freeze drying under the tarps and be all ready to rock in roll at the end of March for our first firing. Herm built a plywood cap to put on the top of the stack. Last year our first firing of the year took over 24 hours for us to see a flame out the chimney which is very unusual. We usually have flame at the 18 hour mark around midnight and Cone 04 dropping. We had so much ice in the chimney it was pouring out steam until the morning of the next day. Lucky for me I had at least had the damper open or I don't know how long it would have taken to  thaw it by setting a fire in the collection box at the base of the chimney.
I love driving in the winter. I love blowing show with my man machine. I love how beautiful the snow looks in the woods and the fields. I hate dealing with snow in terms of the wood kiln. Everything about snow takes you longer. When I lived in what they considered The Snow Belt I used to figure on at least 1 1/2 hours a day in snow removal- shovelling, snow blowing,  moving firewood for the house and pushing cars outta the ditch. One night I got up 9 times to help push cars outta the snow bank in front of the house. Many times it meant using my 4 wheel drive to pull them out.  I lived in a particular spot where the snow really drifted. Being the good Samaritan starts to wear off when you wonder what the hell people are thinking driving in a blizzard. More often than not they were not dressed for the ditch either. It's hard to pretend you're not at home when people are in trouble. My car always carried a two sheep skins, candles, matches, chocolate, a bag of sand, a shovel, a towing chain and  a yes a flask. Water would freeze so no sense packing that. The advice my wise old neighbour was "Go in 2 wheel drive and get out in 4 wheel drive!" Get stuck in 4 wheel drive and we'll see your vehicle 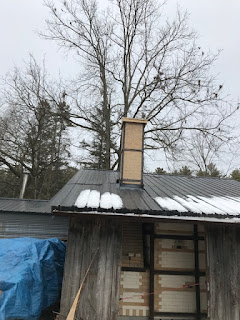 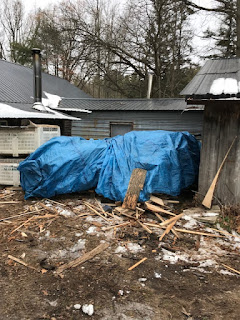 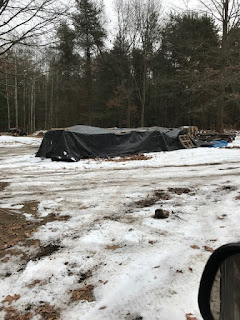 in the spring."
Like a wood kiln winter is to be respected. If you go into it prepared you'll come out the other end in good shape.