I have written before that it seems most of what I have learned has been by mistake. The trick is that you have to keep an eye open to see what is so good about your mistake.
For the Bon Feu Show I surprised everyone with these tall elegant vases that were so not recognizably me. They were a complete success from a financial point of view. For me though there was something not me about them. Couldn’t really figure out the reason I sold so well and of course when I do sell well I stop doing that and move on to something else. Fear of success has always been my ghost not the fear of failure. “ I have a stepladder. It’s a very nice step ladder but it’s sad I never knew my real ladder. Craig Charles-actor”
So I took a vase out of the mould too early and it slumped before my very eyes. I thought oh shit and cut it up to use some of it’s parts and squished it down more. I used some of it’s cut parts as additions to another.
As I walked by the dry old bones of the skeleton I had cast aside(har, har)  I thought hey that’s more like it so I cast one and pulled it out early and tried to control the squish. I made marks in it, poked it and had way more fun. This is more me and most likely less saleable. Previously the fun had been in the jagged seams and sculptural additions. Now the form and the additions were available to be poked and proded.
These pots are destined for the Ratagama at Ronnie the Rat’s. For me to put a formal bottle next to one of Ronnie’s pots would be like a guy in a three piece suit showing up at wood firing. What are you doing here? Did you just come to watch? Are you going to get dirty with the rest us?  Do  I owe you any money?
I’ve had some very nice pots come out of the Ratagama. These ones will be the first porcelain ones I have put in there. Some are pink porcelain and some blue.  The blue ones are girls and the pink ones are boys. No, I’m not sexually confused! I think real boys should  and can wear pink.. I’m
prepared for all the abuse I’ll take from Steve Driver and the Arkies.  I have always scoffed at their porcelain and hated to admit how beautiful it often was. I’ll wear my scars on my chest.


Ronnie says this is The Last Waltz. I don’t want to believe that. I love that week in Athens, GA 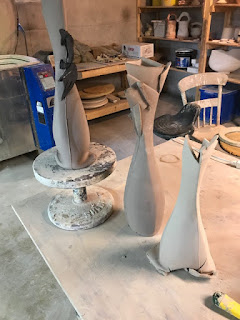 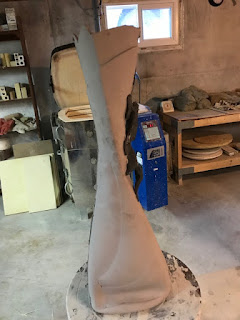 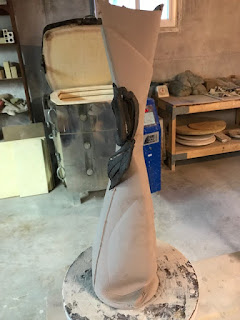 soooo much. Some go sun seeking, some go golfing, some on cruises, some do Paris. My favourite week is being with my clay friends at Ronnie and Hesters firing the Ratagama.  I don’t want it to ever end. Can I turn back the pages of time?

Pat Watkins said…
Carl Sagan one said that mistakes are portals of discovery. So, I like to use them to learn and expand my
horizons.
December 28, 2017 at 5:42 PM

Never get out of the boat.