I'm just in from one of the best potter's conferences I've attended in a long time. One of the reasons is that for once I was in the audience and not a presenter. Presenting were Kleinreid designer potters from NY City, my long time friend and teacher John Neely of USU. I had to explain to people how John could look so good at age 102 having been my teacher. As well we had Donna Polseno from Virginia.
Each of them were brilliant and masterful. Pete Pinnell gave a lecture on the Friday night about the use of functional objects and how they are active pieces of art and not just passive like 2D art. They can be made better with use. I found this fascinating.
So both Pete and John had teapots for sale at $500 clams each. I asked this question which I asked once before to an Ontario artist and he got his knickers in a twist over. The question "At what price point does a pot cease to be functional? John's answer " I don't know I haven't reached it yet!" He sold 4 or 5 of his teapots so I think his answer is dead on the money.
Pete later came up to me and said he liked the question and here was his response called "Pete's Inverse Law of Expectations . If you buy a shirt from Walmart for $15 you expect to wear, work in it, throw it in the washer and dryer and treat it rough. If you spend $150 on a shirt you wear it rarely and have it dry cleaned. If you buy a $1500 shirt you wear it once and donate it to a museum.
Sunday the workshop was about ideas. Three presenters April Bowles Olin on Building a Successful Blog- something I should learn. Bruce Dehnert was absolutely brilliant with a talk on writing and making. Really great, Bruce. I was blown away. Then Mur Lafferty was a very dynamic speaker podcaster. She had 11 rules to be a successful creative person I must seek them out. They were awesome. The l11th rule 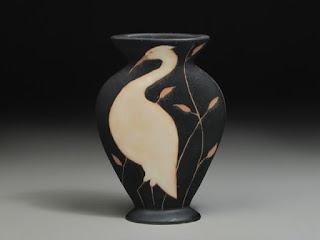 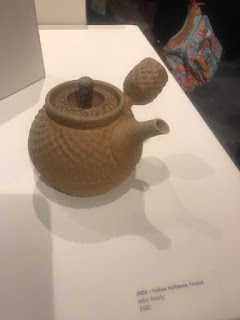 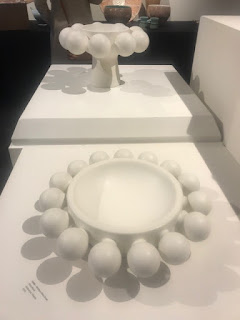 John Bauman said…
Three of my favorites at expressing an idea in clay. You lucky dog to be in the audience.
March 5, 2018 at 7:36 AM