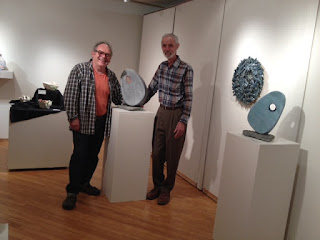 16 tons, another day older and deeper in debt. - Tennessee Ernie Ford
It was my great pleasure to attend the opening of a show of clay work by my old friend Don Ross at the Ingersoll Creative Arts Center.  Don and his wife Maureen probably passed more than 16 tons of clay through their hands in a given year. In their hay day they employed 9 people and supplied pots to an international restaurant chain with locations world wide. There is still life after so many years of production. Don saw age 70 in his rear view mirror some time ago. (I'm not telling). He is still fit as a fiddle.
I often referred to Don as Canada's Harry Davis. He could make anything and make anything work. More than once he rescued me from some kind of kiln malfunction. So he has decided to make art instead of filling the room with good solid functional work. He has earned the time to step away. Congrats Don on putting such a nice finish on a remarkable career in the mud pits. It's a pleasure to know you.

smartcat said…
What a great tribute to a great pot maker! You do have a way with words, Dr. C!
BTW, it's Tennessee Ernie Ford who sang Sixteen Tons, which brings back more memories of growing awareness of workers injustice!
Ah the chain of memories!
September 21, 2015 at 5:19 AM

smokieclennell said…
thx for that correction Tennessee Ernie Ford. T
September 21, 2015 at 8:03 AM