It seems whenever I go somewhere to teach a workshop I end up coming home having learned something new. I like this Ted Neal invention for scrubbing a soft brick to make it fit the door. It is a piece of 2 x 4 with a bunch of bottle caps screwed on it. You get to share a couple of beers with friends and recycle the caps and put them to good use. This works sooooo much better than rubbing the brick on a cement floor which I have done for years.
Because it was Culture Day at the Shadbolt Centre we had to keep the smoke down. Every time we did a stoke that was a bit on the heavy side the chimney would belch black smoke. John Neely is just across the border and I could actually feel his disapproval North of 49. The cure for the smoke was to throw a litre of water in the firebox. Just like magic the smoke would disappear. I recommend all USU students keep a pail of water handy so when that tall figure of a man with arms crossed at the window is watching over the firing you can clear things up rather quickly. The train gang cut, split and stacked the wood rather nicely for the firing. Easy to move around with a pallet jack. This is one of the easiest firings I have ever experienced. I'm on the ferry going over to the island to be picked up by Cathi Jefferson in her sexy Mazda Miata and then off to spend the night with Grass and Judi. Can't wait to see the old beans. 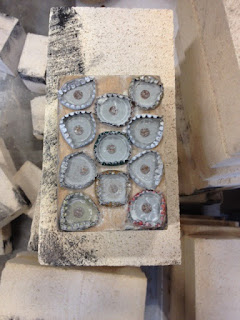 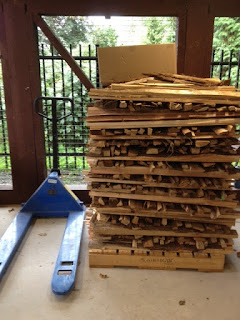 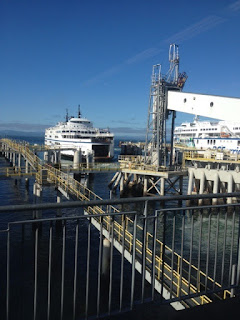 Dennis Allen said…
Sounds like a great trip. Wish Robin well from everyone who ever made a pot.

Cheryl Stapleton said…
The ferry ride must have been spectacular with not a cloud in the blue sky! I hope Cathi had the top down! Zoom!
September 28, 2015 at 3:51 PM

smartcat said…
Sounds like this may be a best trip ever.
Good wishes to Robin and all; from yet another potter!
September 29, 2015 at 6:27 AM