I am enjoying a new host Candy Palmater on CBC radio. She is a recovering lawyer and an openly gay woman. She was lamenting the other day that perhaps they ain’t making real men no mo! Guys that can fix things, build things, hun, fish  and ride motorcycles and drive pick up trucks.  She was remembering her deceased brother as she put on a pair of watermelon ear rings he had bought for her. She could hear the rumble of the Harleys.
They may not be making those men in some parts of the world but here in Aylmer the camoflauge fashion capital of the world those men abound. Men here aren’t texting, emailing,  gaming, flower gardening or reciting poetry. Guys here plant crops, drive real tractors , hunt for food that they actually eat, and if ya need a hand they make time. They can fix most things and build what they can’t fix.
Ya gotta git to know the language though. Are yous guys gonna go fer some hamburgs. Gidday, how’s she goin’? How’s it hangin’?   I went to look for my wife and there she was – gone! He ain’t nuthin’ but a piss ant!.
When I got my Peter Pugger weighing in at 430 lbs to go down a narrow set of stairs to my basement some suggested I would need to hire a piano mover or some such company. I called on a childhood friend that is a farmer. He said we’’ll git er dun! He, his son and one of his farm hands showed up and down she went in two minutes flat. Hey would you guys like a beer? No thanks, we gotta git back to the land.  Need something done call a farmer.


Here is one of my plates.  A little bit too flower like 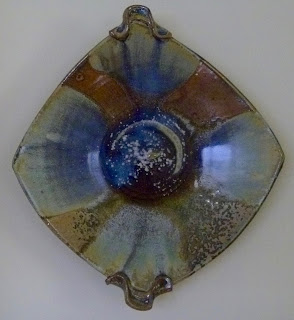 for the boyzzzz around here.

Dennis Allen said…
nowhuchamean I grew up working on farms. Learned how to work and work some more then work til the job was done, not til you were.If something broke you fixed it then got back to work. Real men bond by shared work and suffering not by motoring down to Timmies for a donut. I don't think we are breeding weaker stock but more rigorous training wouldn't hurt.
July 6, 2016 at 7:30 PM