Seagrove has a unique situation for potters wanting to stay and be in the game. This in my mind beats working at McD’s and saying “ Would you like fries with that?” Here is a pic of Jared Zehmer and Wild Bill Jones. Jared makes half the pots in Seagrove. He goes from pottery to pottery and throws their production line and is paid by the pound. A good quick thrower can make a decent living wage. Reportly the other half of the pots are made by Chad Brown. These dudes can move clay.
Wild Bill Jones seen here having a Black IPA with Dan works two days a week here at Starworks making a production line for a designer.  The work is marketed throughout the country.
Cary Hulin and David Stuempfle (had to check the spelling) both got their chops doing production at a big workshop in Wisconsin. Later David was a journeyman with Vernon Owen at Jugtown here in Seagrove.
This kind of security allows you some steady income while establishing your own studio and following. You also leave all the troubles of glazing, firing and selling behind you. That is precisely why I like doing workshops. I leave all the real mess behind me and only do the neat stuff- talking and making.
Seagrove is a unique place where there are journeymen that have the skills to be worth your hiring. Most places you need to train someone and wait two years before they are worth the time and money you invested and then they leave you to start their own studio.


I have never had an assistant. I would make a terrible boss. I tried once and it ended that I worked for the guy that was working for me. I would be stuck putting handles on his pots, trimming his pots when he didn’t come in and I spent fewer hours on my pots instead of more time.  I also think he made more money than I did. That's not the way it's supposed to work.
The harder these guys work the more money they make. Ain't that the way it is supposed to work. Another memo that slipped past me without me reading it. 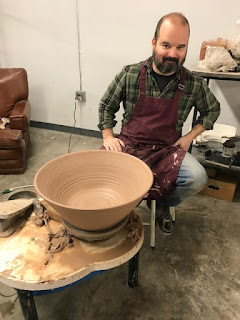 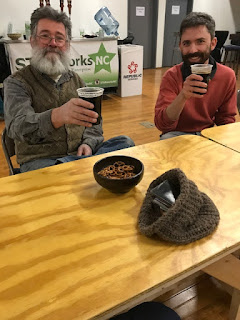