Today I went to the mailbox and got a package from my recent student potter friend Dominic from Haida Gwai on BC's Wet Coast. Dom sent me some of his finger potatoes and some of his homemade kimchi.
Dom took a glaze course with me in the spring and has been in contact since. He lives on a remote island on BC's north coast. He is what I would call a renaissance man. He built his house, tends his garden, he fishes in a sea kayak  and he hunts for his food.
I remember how jaw smacked some of his fellow classmates were at how he described how his two dogs slept under the house. He said they had a job to do. They were to keep the deer and rabbits away from his garden. Most of his classmates sleep with their dogs, get special biscuits for the dogs at the Doggie bakery and buy sweaters and shoes for the dogs to suffer thru the cool weather.
Have you ever seen a working dog? A dog that works just as hard as you do. I have seen two dogs herd 300 sheep. It is an amazing site. I think rural and city people have a different view of a dawgs life. Maggie and Roxy spend the day with people but have their own quiet little warm houses in the garage at night.. It is hard to keep that bugger Roxy off the wood kiln couch. The rascal.
Thanks Dom for your thoughtfulness. Your island is on my bucket list and you'd be the man to show me what i want to see. Thanks, dude!!!! 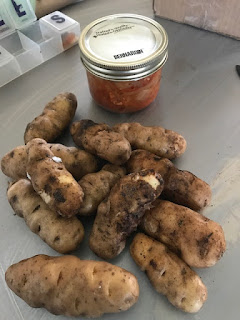