It figures that a guy born in the year of the rabbit would think of something to do with rabbit poop. As I told you I wanted to throw some of that white nasty stuff. I was warned that with porcelain you need to throw it, put it on dry wall, cover it with bed sheets,(preferably linen or silk)  then plastic, sing Kumbaya before you put them to sleep and sing it again first thing in the morning of the second day of slow drying.
This doesn't suit my git er done personality. So I threw these bowls off the hump in the morning, trimmed them before supper and bisqued them the next day.  Here's the secret- rabbit poop. I learned this trick many years from a beautiful functional pot maker David Shaner of Montana. I trim the bowl then take a soft piece of clay the size of a big rabbit poop and push it in the middle of the foot and throw a wee whoopee in the middle. If there is a crack it is hidden with poop. Smart like a rabbit. Some take a piece of rabbit poop and place it in the middle and push their chop mark in there. Once again the crack is hidden if it exists. Hope to fire these guys this week to show the Grasses on the weekend. 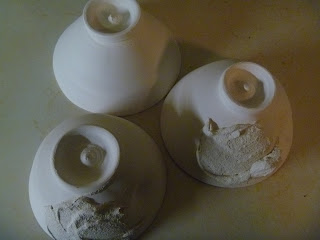 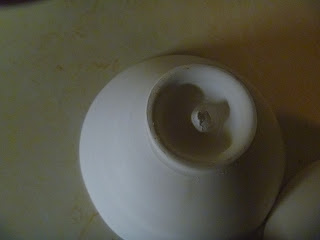 Annied01 said…
if you are planning a visit to RH, please give him a hug for me... I sent him a handled whiskey cup last year, I had promised him when we visited that if the salvation glaze worked out and fixed the blistering on a whole kilnload i'd messed up i'd send along a sample... he was a most gracious host, showing D and I around the gardens, spending time there was like a little zen retreat for a few hours... have fun! ps, i'm sure glad our rabbit poops smaller than that! xoxox, Anne
February 15, 2016 at 5:37 PM

cookingwithgas said…
David was a kind soul. I learned this trick at a workshop he gave many years ago. I can't remember another workshop with such kindness and grace. I ordered a pot from him, paid, he would make it and send to me. I didn't know what it would be. I was surprised with a beautiful covered jar that I use everyday. He was one of the good guys. I know he is missed. I think of him often.
February 16, 2016 at 4:58 AM