I just finished an article I am writing about the wood fire mentorship and I have been thinking of the critical process. Many people don’t like it and have all kinds of reasons to avoid it. I remember it said that “The critic is someone who makes their reputation by destroying someone else’s. I don’t believe this is so. I think if you were to ask the mentees from our group they would unanimously agree that the honesty and respect was always at the base of the critique. There is a much needed role for someone to lead the critical process at all levels of Ceramics. I remember lots of potters got their knickers in a knot over Garth Clark’s article the Leach Orphans. I thought it was great although it was well directed at me and those I have followed. It started dialogue. He has his job to do.  Sometimes it just isn’t a pretty job.
I have written before that I believe Muhammad Ali was the greatest athlete of my time. Here’s what he had to say:
It’s a job!
Grass grows,
Birds fly,
Waves pound the sand
I beat people up!
Often during the critique at Sheridan when I taught there you had faculty that were known as bad cops and those known as good cops.  Somebody had to be the rat or the wild boar.  Each had a job to do. Some students require wheel barrows full of praise and some need to be told to do something else. If they really want to do it they will do in spite of what they are told.


I was the kid in school when a teacher or my parents told me I couldn’t do something I would find a way to do it. My parents never wanted me to be a potter.  Never doubt the strong will of a person that chooses to work their lives in the clay pits.
Every time I try to link something on my blog it goes screwy. Google "Mel Brooks The Critic on U-tube) 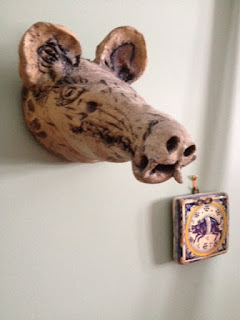 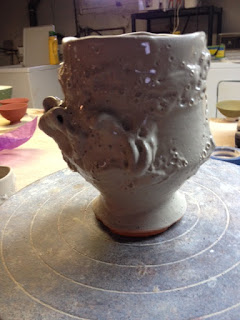 . I used to watch this on a 16mm projector. It still makes me laugh. Instead of an old Russian immigrant picture Dennis Allen with a southern accent.

Dennis Allen said…
Imagine? Every time I go to Tennessee I come back talking more like my ancestors.Or it might just be that hillbilly music I keep playing. To the point of your post, there is a need for honest constructive criticism. You don't get better by people blowing smoke up your skirt.I see a fair amount of badly made stuff online that people are just gushing over, apparently just to be nice. This does no one any good.Say something useful, don't be mean but be helpful.
February 17, 2016 at 4:27 AM

gz said…
criticism doesn't have to be destructive and negative,can be positive, affirming and constructive.
February 17, 2016 at 5:25 AM

Unknown said…
Denis I don't believe that all of the gushing over poorly made stuff that we so often see is just to be nice - I take it as coming from those who, themselves could use more critique, as they haven't yet developed their own skills or an eye for pots worth gushing over. I often wonder why some avoid any form of critique- or only want the pleasant comments - even considering helpful urging to somehow cross a line (if you don't have something nice to say... good grief). I will always be wide open to the most frank and straightforward critique of my work - always have been, and have moved forward with those most useful comments. I may not always choose to agree wholeheartedly, but will always take something of value away.
February 17, 2016 at 1:37 PM