Takin' a whack at

It's easy to take a whack at people that make changes in their lives and their work and that say things that others want to say but dare not to.  I just spent the last couple of days making these pots that I doubt I will revisit but it was time for a change. I seem to always get off to a slow start in January making some things that sometimes a small part of that time for play resurfaces somewhere else in my repertoire. I had a prof once named James Miller that said if you say something intelligent they will remember you as the guy that something intelligent. If you say something stupid they will remember you as the guy that said something stupid. If you say nothing at all no one will remember you -period. I think the same can be said about a potter's work. Make it really awful or make it really incredible. There is a sea of pots that really don't get talked about.
My buddy Johnnie Brit gave me this cup at NCECA. Johnnie took at whack at Leach. I happen to be a Leach fan. Leach will not be forgotten. I think his writing is as valid today as it was in 1946. Yes, we can be jealous that he was the son of a Colonial Judge and born with a silver spoon in his mouth but we can not take away what he did for studio pottery.
So if you don't like what I did today it's OK I'm hard of hearing. 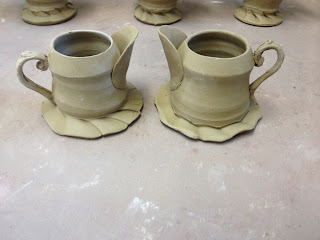 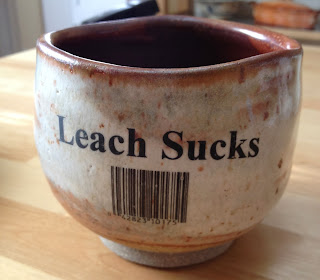 June Perry said…
Love your attitude and your willingness to stretch and explore new territories. Your statement reminded me of one of my favorite book titles "What you think of me is none of my business"! I think a good followup would be "Keep talking, I've turned off my hearing aid".
January 3, 2014 at 11:14 AM

Anonymous said…
Hey how about posting them after you glaze them as well. Can't really judge until I see how it ends.
January 3, 2014 at 12:08 PM