Last night I attended the opening of Trial by Fire a show of work at the Carnegie Gallery that is the result of a raku mentor ship program sponsored by the Hamilton Potters Guild. The HPG has over 300 members that's mandate is the education of it's members and the community at large. This mentor ship program pays a expert in the field to mentor 8 potters for a year with the end result being not only growth in their work but a show at the end.
Catherine Weir Hamilton's Most Outstanding Ceramic Artist of 2012 lead this group. Catherine had a bowl in the show that was for me a show stealer. Here is a pic of me and Catherine. I am also showing two of my former students/friends that were in the show. The little guy beside me Frans Rood has been a student of mine in countless workshops and at Sheridan College. He had a couple of pots that really expressed volume to me.  Some nice ruff edges and a smooth inside just like the man himself.  Then we had Pinecroft's Nurse Irons (Diane) who in this pic looks like she is ready to chop wood again and shout out that familiar ARRRRRRRRRRRRRRRRRRRH! Nurse Irons was exploring negative space with some composite forms. Boy that glaze was killer! Congrats to  Catherine and her gang  for a nice show and amazing turnout! 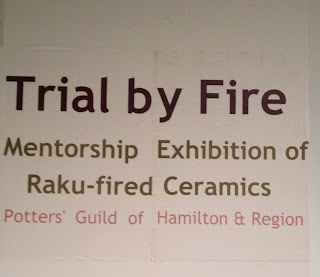 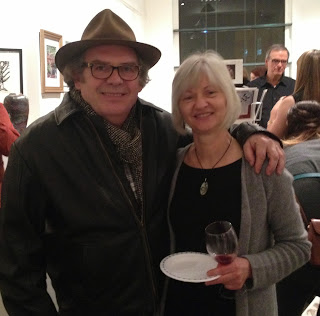 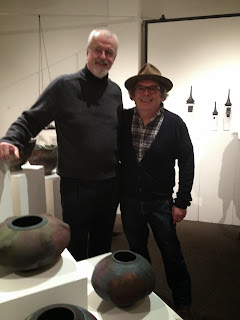 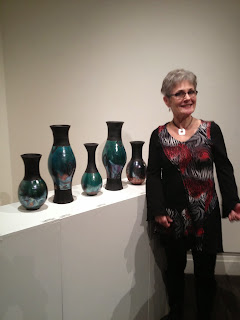 Next year I will mentoring a group of potters on wood firing. This will be a real privilege for me as it was for Catherine. Catherine cried to have them leave her. I hope to make a few of them cry during the process.