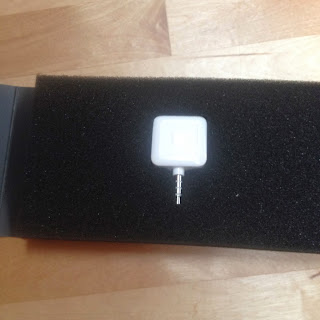 as a vascular surgeon to now sticking needles into people as a acupuncturist.  Doc is a smart dude and will always be at the top of his game. Since he has this pension for inflicting pain he has dragged me kicking and screaming into the 21st century. Doc bought one of the nicest jugs I have ever made. I told him to send me a cheque. He said if I was going to teach students how to be potter's in the 21st century I had better learn to be one.  Since I always listen to my medical professionals except when it comes to flu shots I spent yesterday signing up for Paypal and getting finally hooked up to The Square for my IPhone. I can now swipe credit cards on my phone and the money is in my account before you can say Zirconium  Encapsulated Cadmium. I have already sent out 6 invoices and it is easy peasy. Now my customers don't have to buy an envelope, a stamp, write a cheque and drop it off at the Post Office. Then when I receive the cheque I don't have to drive a couple of miles to our nearest bank. So the moral of this post is never trust a medical professional with a needle in their hand when they say this is going to hurt me as much as it's going to hurt you.  It was a painful day of dealing with the computer. I think  I am feeling much better now.

Unknown said…
Square is great, use ours all the time. You could also really go crazy & get a paypal account. That way they can pay you directly via paypal....
December 23, 2013 at 4:59 PM

Anonymous said…
dave he got that one first. my chg card is feeling it as of sunday am.

smart guy and you can teach an old dog new tricks!!

and yes having that jug is worth it.

John Bauman said…
Now the money is going to start flowing in so fast, it will be like drinking water from a fire plug. Be careful. Wealth has ruined many a man.

Unknown said…
Doc, you're right. missed the part where he signed up for paypal first ! Enjoy the new jug, I'm sure it's great. I've been drooling over some of photo's Tonys posted of his wood fired pieces.
dave
December 24, 2013 at 11:53 AM

Anonymous said…
dave absolutely perfect. has a spot in the kitchen with the teapot i got of his through akar last fall.

also found out paypal has a swipe for the smart phones as well today and cost to purchase is reimbursed by them through your account. cool!

DropStitchChris said…
awesome Tony…glad it's over…I know how much you LOVE figuring out computer crap!!
I'm commenting on the 26th…hope you had a nice christmas….see you in the new year!!
December 26, 2013 at 5:35 PM